Bird watching is a major attraction. Lonesome Duck Ranch is located near the north end of the Klamath Basin along the Pacific Flyway with over 350 species recorded for the Basin.  The ranch itself is a great birding destination.  It is nestled in the sagebrush and Ponderosa along the beautiful Williamson River and at the base of the mountain that forms the eastern wall of the Klamath Basin. Birds observed on the property are from a wide range of habitats such as Blue Grouse, Mountain Quail, and Western Tanagers to White-headed Woodpeckers, Scrub Jays, and from Bewick’s to Canyon Wrens. Both Golden and Bald Eagles frequent the ranch with nests on the National Forest mountainside overlooking the ranch and river. There are several miles of lanes and paths that can be walked and the ranch abuts Winema National Forest. The ranch is located in the midst of the Klamath Basin birding Trail:  Come see why we have the “Best Birding in the West”. 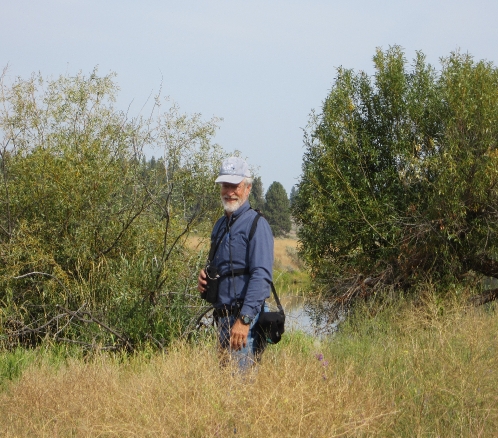 “Great birding! 60+ species and still counting. Many thanks to Marshal and Suzie for their excellent advice & hospitality! The visit was wonderfully restorative. The back porch was the perfect end to lovely walks.” Jack & Ann N. Merced, CA

Guided Tours…You’re tour is personalized for you. Call for more information or pricing for larger groups.

Would you like to be shown around one of the most scenic and diverse areas of the U.S?  Lonesome Duck offers wildlife tours throughout the basin from Lava Beds National Monument to the south to Crater Lake National Park and Klamath Marsh National Wildlife Refuge in the north.

The tours for birdwatchers, nature photographers, nature enthusiasts in general, are led by Naturalist, Marshal Moser. Marshal is a Certified Wildlife Biologist, consultant, and old-time field naturalist. In addition to traveling far and near in Oregon, he has been to five continents and led groups and individuals in the Americas from the Northern U.S. to the Peruvian Amazon. He loves to help people understand the human issues and natural history of an area, including geology, plants, birds, other animals, and the various ecosystems they inhabit.

Lonesome Duck is a great location for the sights of the Klamath Basin. There are abundant and beautiful springs that are the sources of several of the creeks and rivers in the area, several spectacular overlooks, and Crater Lake is only 20 miles away, and often the “high point” of tours. Crater Lake wildflowers peak around the third week of July. Call or email for more information

The Klamath Basin hosts the oldest bird festival in the U.S. every President’s weekend in February, the Winter Wings Festival  Known for the largest overwintering population of Bald Eagles in the contiguous 48 states it also hosts an abundance of raptors and waterfowl often numbering in the hundreds of thousands.

Along the river it is easy to see Muskrat and Beaver in the evening and occasionally Otter, Mink and Weasel.  Big game such as Elk, Black Bear, Mule and Blacktail Deer are in the area and you don’t have to go far to get into Pronghorn Antelope country.