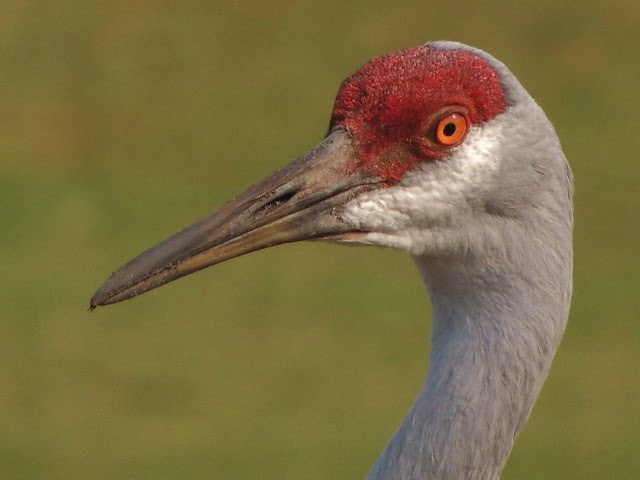 In the last blog I told you that we went to Florida during the first half of October. Besides family, we were able to do some traveling around to some of my favorite sites and explore some new ones. I will share a little of the experiences here.
First of all, how do you like the above picture? It is a close-up of a Sandhill Crane. I am not sure whether it is a male or female, they are not sexually dimorphic like most birds. However, I was able to get rather close, although not a close as my telephoto lens makes it look: 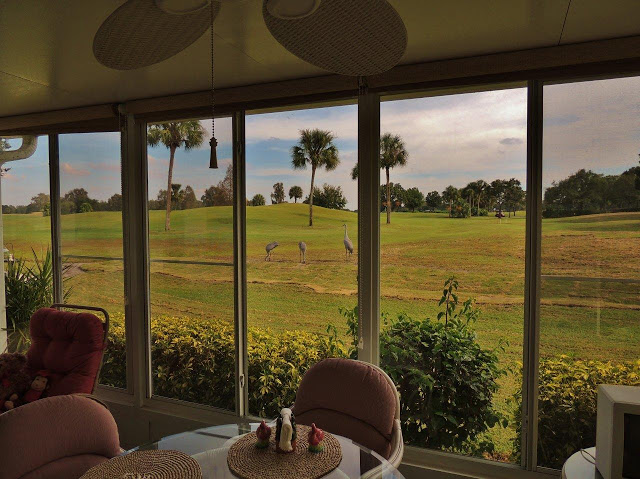 As you can see through the window, they stand several feet tall, and you would not want to get very close to that bill. They eat mostly small vertebrates like rodents, snakes, lizards, and amphibians, as well as invertebrates like crayfish, earthworms, grubs, and larger insects. Officially, the Greater Sandhill Crane has a length of 44” and a wingspan of 77”. They can be seen over the western ¾ of the continent, at least flying over during migration, and less often in the east. However, the central part of the Floridian peninsula has a non-migratory population. It is very used to people. Besides seeing them from the patio windows of a long-time friend, I saw them on the golf course that winds its way through the housing complex where a cousin lives. With such cooperative birds I just had to sneak, well stroll, around the corner and get some pictures.
Greater Sandhill Cranes are common where we live east of the Cascades in Oregon, even nesting in the common wetlands and meadows. However, they are not quite so tame as in Florida. When the large flocks break up in the spring the pairs will stake out large territories. Their rattling calls are very loud and can be heard well over a mile. They will raise their chicks (which are called “colts”) in the grassy areas where there is abundant food.
There is also a Lesser Sandhill Crane that is about a third smaller. It nests further north, even onto the islands in the Arctic Ocean. Many places in central Canada have Sandhills that are gradations of size in between the two extremes indicated by the subspecies names.
1
Share

Experience something completely different. The most powerful theme ever. Button Example