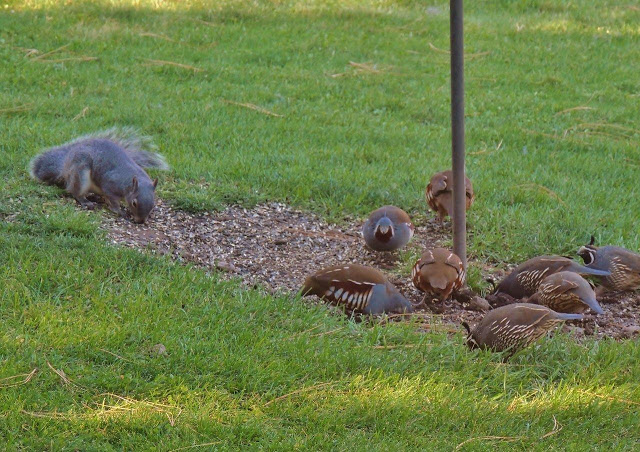 On Monday the above “inter-specific” event occurred at the Lonesome Duck Ranch. We had both the common California Quail and rarer Mountain Quail feeding at the bird feeder between our cabin and the Williamson River. There was a Western Grey Squirrel there and they were all getting along quite well (at the time).

The two species of quail are normally centered in two different types of habitat, efficiently dividing up and specializing in certain of the variety of habitats found in our surrounding creation. They overlap in some places on the edges of their habitats (places) and niches (jobs). The Mountain Quail, as its name describes, is a quail of the western mountains, especially those with dense brushy vegetation and good seasonal precipitation, including snow. The California Quail is sometimes called the “valley quail” since it mostly lives in the valleys and lower, drier areas of the western mountains of the U.S.

I had discussed the quail in a blog earlier this year; the California Quail is a regular here every year. The Mountain Quail is much less common, but this year they discovered our lush irrigated yards and the bird feeders. They have been visiting us up to 3 times per day since their discovery of our yard. The California Quail usually visit us around once per day, especially in winter. However, until now, I could not verify that they ever came to the feeders at the same time; it seems they are in competition (biological) enough that they would take turns. You might observe that the Mt. Quail are the 4 to the left, while the California Quail are the 4 to the right; however, I did see them mix it up a little more while I was watching them.

The Western Grey Squirrel seemed to be content, and they ignored each other.

The squirrels are not always so content, especially with each other.  Last Sunday, 10/7/2012, there were 3 species of squirrels in the yard. At least 12 individuals (hard to count!) were Western Grey Squirrels (larger than the Eastern Grey Squirrel, about as big as the Fox Squirrel that is common east of the Rockies), 2 California Ground Squirrels, and 2 Douglas Squirrels (the little pine squirrel of the West). We have lots of the little Yellow Pine Chipmunks too. The Grey Squirrels are often chasing each other, sometimes for fun, for fight, for other. They will occasionally chase the birds too, but in a frisky manner. The birds seem to know this and return almost immediately. The Western Greys don’t get along with the Douglas Squirrels, which, though smaller are much more aggressive and often win by chasing back the Greys.

The 2 Douglas Squirrels are probably a mated pair, and are not much interested in the bird feeders. They have staked out the Ponderosa Pines and Western Junipers around the cabin. They are constantly cutting pine cones and, this time of year, storing the whole cones in a pile somewhere for winter. Their winter cache is probably under our deck. They will sometimes chew their way into buildings.   :> }  They have also been eating a lot of the ripe berries on the Juniper trees this time of year (the berries that are used to flavor gin). Neither they nor the Western Grey Squirrel are hibernators; although they will hole up for a few days at a time during winter storms.

The California Ground Squirrel is different, although it looks most like the Western Grey Squirrel. It really does live in the ground and is quite a burrower. Some call it the “grey digger.” They can actually do damage to buildings, etc., by digging under the foundations. It is also a true hibernator, known for staying asleep in its burrow for several months non-stop. They can climb too, quite well, but they rarely climb much, especially higher than 10 or 15 feet.

Finally, we still have Varied Thrushes here in small numbers, about half dozen, in yard next to the Williamson River. A few evenings ago I tried to track down an owl call that I have been hearing. It’s one of the really small owls, i.e., a Northern Saw-whet Owl or a Northern Pygmy-Owl.

Experience something completely different. The most powerful theme ever. Button Example